A man has today (20 November) been jailed for nine years after imprisoning two women in a Rotherham casino and violently assaulting them while demanding cash.

Marcel Gazi, 28, locked the two members of staff in the Admiral Casino on Effingham Street on 20 February this year. The two women were alone with Gazi as the only customer, when shortly after 5am, he assaulted and tied both women up and demanded they hand over takings from the casino.

One of the women lost a tooth in the horrific attack.

Detective Constable Dawn Murray has led this investigation, she said: “Both women were subjected to a terrifying ordeal in the early hours of that morning. Gazi forced them in to a store room, before tying them up and shouting “I want money. I need money”. He also chased and punched one of the victims as she tried to escape.

“Thankfully, one victim’s quick thinking meant that she could run out of the back entrance where she alerted staff in a nearby business to call the police.”

Gazi initially ran away, but was apprehended by officers on 1 March. He was positively identified by both victims in an ID parade.

DC Murray continued: “I am pleased that justice has been served today. Most importantly, I’d like to thank both these brave women for supporting our investigation over the last nine months and working with us to ensure this result.”

Gazi was sentenced to seven years imprisonment for the robbery, with an additional two years added for breach of a suspended sentence which was handed in 2013. He was also ordered to serve 14 months for a burglary in Rotherham on 19 January. This sentence will run concurrently.

The Judge ordered that Gazi must serve at least two thirds of his total sentence, and then he will be considered for deportation to Slovakia. 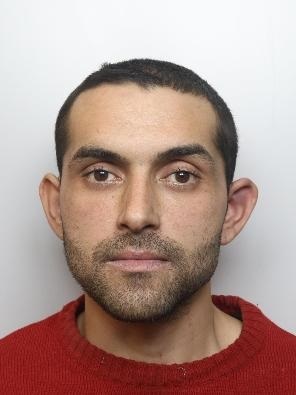