A South Yorkshire widow who lost more than £10,000 after being tricked by a romance fraudster has been left struggling to buy food and pay her bills.

Jane* has spoken out about the dangers of looking for love online as South Yorkshire Police supports a national campaign to raise awareness of romance fraud.

The 61-year-old, from Rotherham, was first contacted by the offender on Facebook. He claimed his name was Darren, and said he worked in the construction industry in the US.

She said: "He sent me a friend request. With being on my own, and not going out, I accepted the request and we started talking. He asked me why I was on my own, I told him I'd lost my husband five years ago and I was lonely. He said, 'I'll be here for you, you can always talk to me.'

"He just said all the things I wanted to hear. I thought he was genuine - I thought I was getting to know somebody and we were going to meet."

'Darren' soon encouraged Jane to switch to chatting on WhatsApp, which has a higher level of encryption - meaning his scam was less likely to be detected.

"He said that his work mates had put their money together for a plane ticket for him to come and visit me, and he needed £50 towards paying them back," Jane explained.

A couple of weeks later, Darren asked for a further £100 to pay some airport fees. Jane sent it. Over the coming months, the amounts got bigger and bigger until Jane had sent him a total of £10,300.

She said: "The last time I heard from him, he said he was in Liverpool in a hotel but he couldn't leave because he didn't have enough money. I sent him £500 and said that was all I had left. I told him I had nothing left, and then I never heard from him again."

Jane's son, who had warned his mum about the scam, eventually persuaded her to report what had happened to Action Fraud.

She said: "My family had said it was all a fix but I wouldn't listen to them, I thought that I'd met someone special and didn't want anyone else interfering. My son said if this man had done this to me, he'll be doing it to other people too."

Sadly, romance fraudsters are incredibly difficult to trace and Jane has been unable to recover any of her money, which was her inheritance from her late mother. She's been left worrying how she will put food on the table and has been relying on food parcels from her son and the local food bank. The stress has led her to drop to just six stone in weight and she is struggling to sleep due to the worry of how she is going to pay her bills.

Since the fraud was reported, South Yorkshire Police has visited Jane to offer advice and support, and put her in touch with her local food bank and other support agencies.

Jane said: "To anyone else out there I'd just say be careful - and as soon as they ask for money just say you haven't got it. I wish I'd done that. It's really upset me, I feel stupid. I got sucked in."

If you think you have been the victim of romance fraud, report it to Action Fraud by calling 0300 123 2040 or online at www.actionfraud.police.uk.

Find out more about the national romance fraud campaign, how to spot the signs and how to protect yourself at https://www.actionfraud.police.uk/romancefraud

*name has been changed 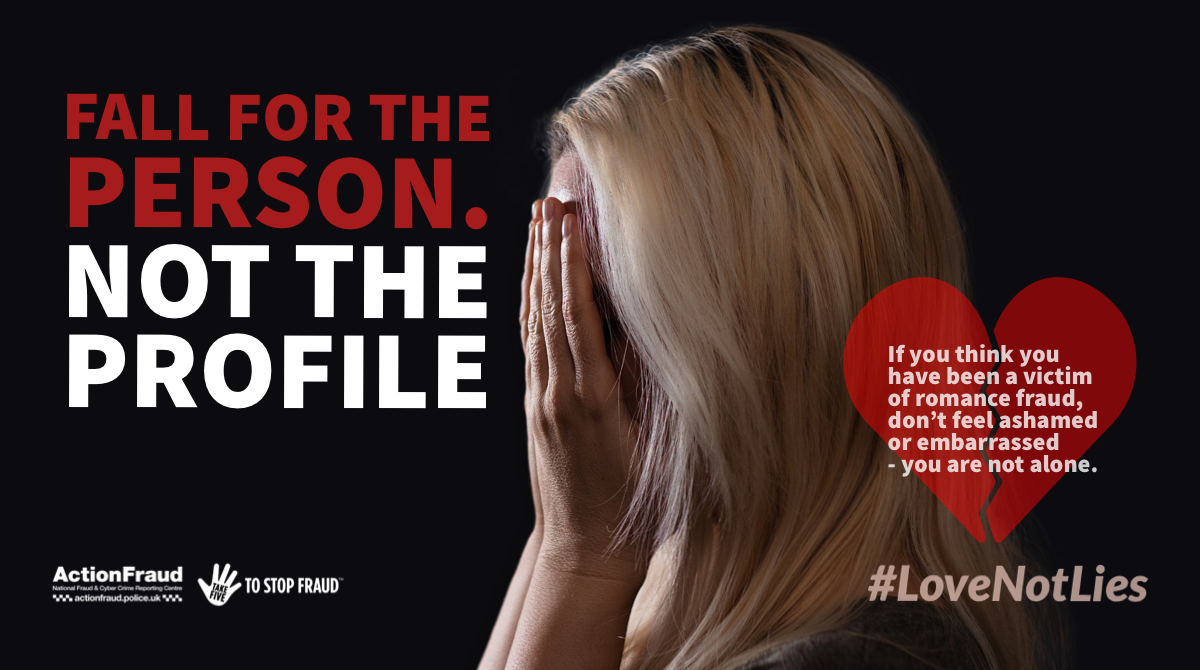