We have spent today and yesterday on a speeding operation across various locations in Sheffield. My colleague was using a speed gun at the side of the road whilst I stood further down waiting for the signal cars to pull over. I was then told the speed that the car was going at as I directed the cars to pull into the side road.  Depending on the speed, I made the decision to either give words of advice to the driver or issue a Traffic Offence Report. I issued three tickets for drivers doing 41mph, 47mph and 49mph on a 30mph road. I was nervous about filling out the report on my phone initially, but after the first time I’d done it I realised it was quite straight-forward.

This afternoon I conducted my first suspect interview, as an allegation was made of threats to kill. The suspect came in for a voluntary interview at the police station to avoid arrest. Around 10 minutes before the suspect was due to arrive, my tutor went to set up the interview room and found that the recording device wasn’t working! We had to quickly think of another option and decided to do the interview via a document on my laptop, where you type the questions and answers onto. When the solicitor arrived, I went in a separate room and briefed him on the circumstances and gave disclosure. Once in the interview room, I cautioned the suspect and gave her the relevant information regarding her legal rights. I’d already prepared my questions, so it was just a case of asking them and recording the suspect’s answers. As the interview came to an end, I got the suspect to provide a signature on my laptop screen to say that everything that was recorded was correct.

Today we spent some time checking vehicles for no insurance/no MOT and other faults. As I searched the registration number for a particular van that passed, it flagged up that it had no insurance. We pulled the van over and spent some time trying to establish whether it did have insurance as the driver insisted it had. We allowed the passenger to return to their house to get her mobile phone which had a cover note on it which showed they had recently taken out the insurance. In the meantime, I ran a person check on the driver and to my surprise it came up that he was wanted for not attending court! As I told the driver he was under arrest and delivered the caution, he became verbally aggressive towards my colleague and the situation escalated so I quickly had to apply handcuffs. Due to his demeanour, we called for a van with a cell in the back to transport him to custody. Once at custody, I presented him to the custody sergeant and explained the circumstances. Today reminded me to expect the unexpected in policing, as a simple check for no insurance turned into my first arrest!

Friday the 13th today and it turned out to be unlucky for the man I arrested for a recall to prison due to breaching his home detention curfew. He was circulated as wanted and we found him at his home address. I presented him at custody ready for him to be transported back to prison later in the day. All within the first hour of my shift! Not long after, my tutor received a message from our colleagues in plain clothes over the radio that they suspected a vehicle was involved in drug dealing. We pulled it over and searched the vehicle and its occupants. I found a baseball bat in the back of the passenger seat, which was seized. When the passenger was informed that he’d be coming back to the station for strip search, he ran! I quickly followed behind my tutor and tried to keep eyes on the suspect. It was a very warm day today, made even hotter by running in a stab vest and full kit. We called for backup as we lost sight of him but knew he was still nearby. We then heard over the airwaves that the suspect had been found in a bin outside the local shops and shortly after detained. We brought him to the station where my male colleagues conducted a strip search. Nothing was found, but we were aware anything could have been disposed of or swallowed whilst the suspect ran away. Both driver and passenger denied the possession of the baseball bat in interview but were reported on summons for any offences found. 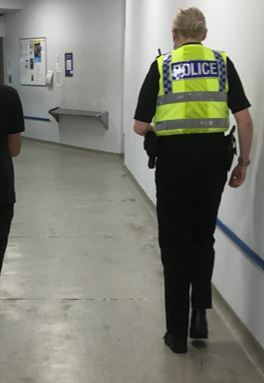